Onto the stage walks the great Vishwamitra. He says ‘Dear people of Ayodhya and Sapt Sindhu, I am happy to save the boy. But I am also here to say a few things. The asuric forces are working with full force to defeat Emperor Kartivirya Arjun and bring downfall to the Sapt Sindhu Kingdom. Even after knowing all this, the highly knowledgeable people with powers are unable to do anything about it. Guru of Asuras, Shukracharya is becoming very dangerous. Even though we have the greatest of Rishis and Brahmarishis, Shukracharya has moved ahead of Manavas and Devas’.

He glances at Vasishtha and then says ‘Shukracharya is crossing the intellectual abilities of Brihaspathi and this is the most dangerous to our society.

The fear of Asuras and Shukracharya is not new to the people. Because there have been multiple wars between Asuras and Devas. The issue was with the magnitude and timing. Apart from this, the people of Sapt Sindhu are also not aware of the situation. Whereas Ruchik, Jamadagni, Vasishtha and Vishwamitra are fully aware of it. But none of them could do anything to counter Shukracharya.

What made Shukracharya attain strong powers. Was it the will or the revenge on Devas?

Shukracharya had both the will to attain the highest level of powers and take revenge on Devas. More importantly, Shukracharya was given free will to do whatever he wants to. The four key characters were busy with other things. Ruchik moved to the Himalayas and is meditating. Jamadagni is more into training Parashuram. Vasishtha is in pursuit of creating a successor for himself after the death of his son and Vishwamitra was busy in his pursuit of becoming Brahmarshi.

The asuric forces were making sure there is a rift between Kshatriyas and Brahmins. This is why the parents accepted sacrificing the kid. Because the parents were not having enough money to feed the family. Only if the family was abundant enough, this wouldn’t have been the situation. This was not the case some years ago. Brahmins had enough food and money to survive because the Kshatriyas would donate. But after the Asuric forces were released into the Sapt Sindhu, Kshatriyas have neglected the brahmins.

This isn’t the way how Sapt Sindhu works. Sapt Sindhu is all about the security, safety, respect and welfare of every individual. This was true before Shukracharya drafted a plan of vengeance. The moment Karkotak was killed, the hunger for revenge multiplied. That’s the result of all that happening in Sapt Sindhu.

Back to the people assembled at Rohit Ashwa’s birthday celebrations!

Vishwamitra is continuing his speech. In one corner, Vasishtha is sitting with his head bent with embarrassment and helplessness. Vishwamitra says ‘I had to use special powers. I didn’t want to send a message of victory for Shukracharya. Thus, I invoked the God of Wind and God of Fire, Vayu and Agni. After my request, they helped the boy is coming out even after death. The gods have blessed him with new life and I am grateful to them. Now that everything is over, Rohitashwa will live for a long time. After this statement, everybody starts clapping.

Parashuram is impressed with the actions of Vishwamitra. Then on Ram sees Vishwamitra as the real hero. Harishchandra feels bad for whatever has transpired and he falls on the feet of both the gurus.  Vasishtha now opens up. He says ‘I made a big mistake. I should have been more active and careful. This is my failure and I have decided to resign as the ‘Kul Guru’ of Suryavansh’. Harishchandra with clear sadness says ‘Please don’t do that Guruji. You have made no mistake’.

Vasishtha continues ‘I now request Vishwamitra to take over as the ‘Kul Guru’ of Suryavansh’ till I do penance for my mistakes in the Himalayas and return.

A new Guru and a new era in the Life of Suryavansh!

Vishwamitra accepts the new role and says ‘The Suryavanshis need some more hard lessons and I will teach all that is needed. Everyone in the audience is praising Vishwamitra and falling on his feet. 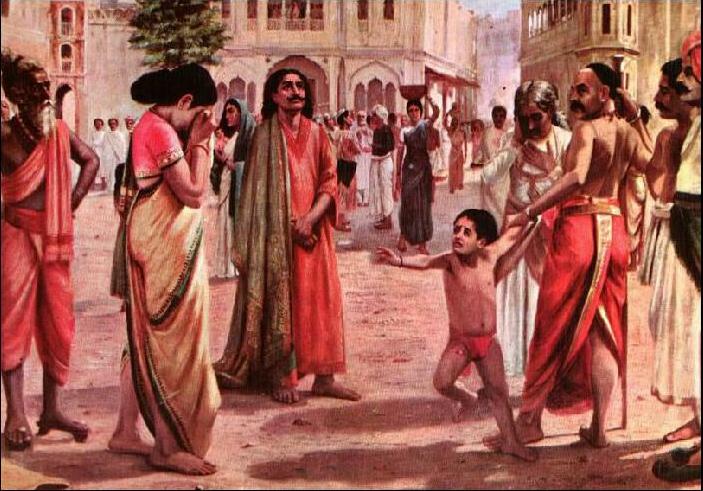 From the crowd appears Parashuram. He comes forward and as soon as he comes, Vishwamitra recognises him and hugs him. He says ‘Oh dear Ram. I know who you are. You are the son of my dearest Jamadagni. We both have studied together. I know what all has happened with father and mother. I wanted to meet them, but I just couldn’t. Parashuram replies ‘Pranam Pitamah. I am happy that you know many things about me. I am a bit worried about mother and father’

Vishwamitra says, ‘Son, I have used my yogic power and I can tell you both are happy. It took them time to get habituated, but now they are having a peaceful life together. Understand that, you are an important person. Your life and your work are crucial to society. You are the chosen one and you have to accomplish whatever I was not able to achieve’.

Vishwamitra is now explaining to Parashuram the background to the battle of Asuras and Devas. He continues ‘Dear Ram… For you to achieve what I haven’t, you need to acquire weapons. The situation right now is very tough and there will be an intense battle soon’ Parashuram then asks Vishwamithra the reason behind the war.

Vishwamitra tells him ‘Son, Nature is the most powerful. It keeps balancing things. When you look at 24 hours, the balance for the day is night. Balance for good is bad. Balance for kindness is cruelty and that way balance for Devathas are Asuras’

Asuras vs the Devas –nature’s way of balancing things…

Parashuram asks ‘Why is that Pitamah, how can a country become poor after becoming rich?’

Vishwamithra says ‘Dear Ram! Listen carefully. A poor country is one with no resources. Then comes a good king or good leader. He will create opportunities to build wealth. This will be a slow process and it will become make the country wealthier. The king will become popular. With the help of increased wealth, he shall occupy other Kingdoms and will become Chakravarthy. Kartivirya Arjuna is the Chakravarthy of today. But because Kartivirya Arjun has made things easy and people richer there won’t be anyone to do menial jobs and the rich themselves have to do their work. That creates strife and struggles This is nature’s way of correction.  Presently, Sapt Sindhu is going through the stage of moving from Devathas rule to Asuras rule. You are the one who is chosen to stop it from going into Asuras’

‘So, Son, apart from my blessings, you need Lord Shiva’s blessing. You will have to now rush to the Himalayas and acquire the powers with Meditation. Do not worry about your parents. I will inform them physically. May mother nature be always with you on this journey…