Where did Vishwamitra go after the discovery of the Gayatri mantra?

Vishwamitra after discovering Gayatri Mantra realised his next step as per Dharma and decided to set up an ashram. Even though he became a full-time guru, he didn’t enjoy this part of life. He was dissatisfied because more than ‘teaching’ he is interested in other activities. He is living and dreaming of becoming Brahma Rishi.

These thoughts were pushing him to think about Vashsitha. Vasishtha by now became the Kulaguru of Surya Vansh. Not just that, to his utter despair, Vasishta trained his son Shakti to take over from Vashsitha. Vishwamitra is aiming to be Brahmarishi, Shakti is already Maharshi by then. All these situations way brings fresh energy to take revenge and he is waiting for an opportunity. Vishwamitra wants to take over Vasishtha and make sure he gets a bigger name and fame. If we compare Vishwamitra and Ruchik. Ruchik was just a Rishi, not even Maharishi. Importantly he is happy just being a Rishi. As he enjoys meditating and educating people. But Vishwamitra is an ambitious person. With all these comparisons and thoughts, he leaves his ashram and visits different places. In this journey, he visits a Kingdom whose King is Kalmashapada.

Coincidentally Shakti was the kula guru of this kingdom. He was removed by the king due to the ongoing differences between the Brahmins and Kshatriyas. Vishwamitra stops in the Kingdom and sits for meditation. Shakti is also nearby and he finished his meditation and starts walking. Vishwamitra meditating some distance away hears an argument. It gets bigger and starts disturbing him, he gets up from meditation and sees Shakthi.

“Shakthi was walking on the path and the King came in his way. King wanted Shakthi to move out of the way but Shakthi said give me the way ‘I am Brahmin’. King said I am the King and I was the one who hired you and paid you money, so should give me the way. Shakti starts abusing the King and says ‘You don’t know whom you are talking to, I’m the son of Vasishta’. Kalmashapada gets angry hearing of this and with a lot of anger kicks Shakti. Angered Shakti gets up and in the fit of the anger, he says ‘You monster, you have insulted a Maharishi and it is unpardonable. I curse you to become a monster. You will now move all over the place’ immediately after his curse, Kalmashapada turns into a huge monster. 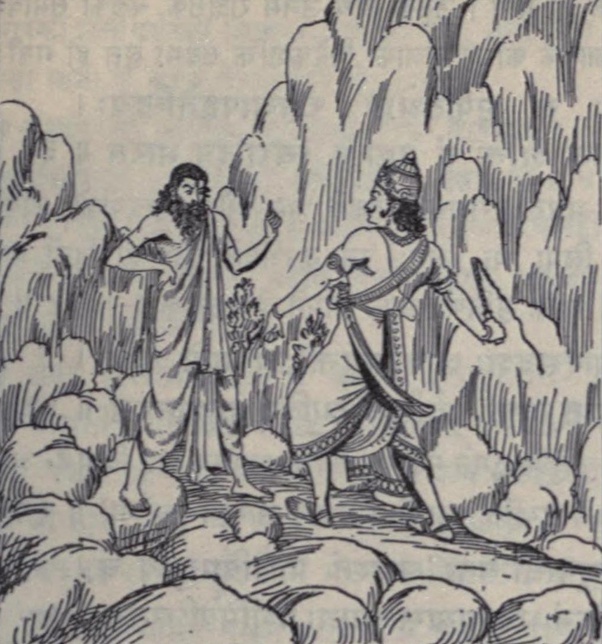 Kalmashapada realises his mistakes asks Shakthi to forgive him.

Shakthi then says, ‘not only me but nobody in this world can forgive you. You will not just be a normal monster but you will be a man-eating monster. Remember, seeing you every human will be scared’. The moment Shakthi says this, Vishwamitra who is waiting for an opportunity gets an idea. Using his yogic power, Vishwamitra sends Kalmashapada – the monster a message. ‘Kalmashapada you are turned into a man-eating monster and you should eat Shakthi’.

Listening to this message, Kalmashapada laughs loudly and says, ‘Oh you fool, I’m going to eat you first. Shakti is shocked and in a helpless position. He realised how big a mistake he has made. Shakti had no other option to run and he does exactly that. But unfortunately, he is against a monster. Kalmashapada chases the running Shakthi, catches him and eats him off.

Vishwamitra’s level of relief is slowly going up but he is not yet satisfied. He then tells the monster to the attack ashram. Kalmashapada runs towards Vasishtha’s ashram. Vasishta and his wife Arundathi were not in the ashram at that moment. Kalmashapada shows all his power and eats away all the sons but leaves their wives. After this brutal act, Kalmashapada runs into the forest.

Vasishta comes back to see a bloodshed Ashram….

Vasishta and Arundathi return to the ashram to see the brutality and the entire story is being narrated by the villagers. Sons are all dead, the women have run away. Listening to this, Vasishta breaks down and becomes inconsolable. Arundathi tries hard to console him but she couldn’t. On that night, feels very unhappy and doesn’t see any more reason to live.

Frustrated Vasishtha shouts loud why the hell am I not dying?

The creator, Brahma appears and says ‘Why are you doing all this?’ ‘You should not do be doing anything to yourself, remember you are my creation and you are on this Bhu Loka for a purpose. You are here for saving people and following your Dharma. Just to tell you, your Daughter-in-law needs attention. She is pregnant with a baby boy in her womb and you are the right person to teach him.

Hearing to this from none other than Brahma, Vasishtha finds a new reason to live. He travels back to the Ashram. Seeing his daughter in law pregnant a new energy flow rush into him. As he is entering the ashram and he hears Vedic hymns, but nobody’s chanting them. Arundathi then shows daughter in law and says ‘It’s coming from her womb’. Vasishta then understands that Arundathi was always there for the family and she taught the daughter-in-law all the Vedas.

Vasishta apologies to Arundathi and thanks to her for all her efforts in taking care of everything including the ashram. Soon a baby boy is born. The boy is named ‘Parashar’. All that Vishwamitra didn’t want to be had happened once again… and once again the anger in Vishwamitra is ruling him…