Those who strive for liberation from old age and death, taking refuge in Me,
realise in full that Brahman, the whole knowledge of the Self and all action.

After talking about the delusions arising from the pairs of aversion, Lord Krishna in this sloka shifts his attention to people who worship Him. He says that all those people who are afraid of the old age ailment, suffering and the death that the body undergoes and the suffering that the soul has to put up due to it, take refuge in Him. When they take  refuge in the Lord, they understand what is true Brahman. True Brahman is defined as the whole knowledge that a person possesses of his soul as well as the actions that he performs outside.

Old age and death are two things that every human dreads, but infact it is inevitable and has to come in everyone’s life. What is old age? It is the gradual slowing down of the reflexes and body movements and the action of senses. It happens from the time we are born. That is why we always ask “How old are you”. At 13 years you can run fast and the speed decreases at 23 and at 33 it decreases even more and at 43 it becomes clearly visible that you have lost much of your speed. After 53, 63 comes 73 and you might require a support to walk fast and that is how walking stick comes into your hand. A boy who can run like a bullet at 13 needs a walking stick at 73 to walk.
Old age is much more than that. Its not just about running or walking. Its about every organ and every function of your body. Your eyes, your ears, your reflexes, your reaction time to things everything slows down. Let’s now compare with the work and responsibilities that one takes. At 13 a boy will run like a bullet but he has almost zero responsibilities. At 23 he becomes a bit responsible. At 33 the responsibilities  increase further. It goes on increasing at 43, and 53 and at 63 he is forced to leave his responsibilities because his body doesn’t co-operate. His mind doesn’t want to leave them but his body will not support his mind. This conflict is old age.
Once old age sets in, a person goes through a psychological trauma where mind refuses to give up but body is not co-operating. That makes the person fearful, insecure, negative and he make his life miserable due to that conflict and that is what is the old age conflict that a person suffers from. Added to that he becomes a burden to people around, as he no longer contributes to the economy of the family and thus he becomes an unwanted liability. That further puts pressure on him and he goes through an immense suffering. And one day all that suffering piles up to be so big that either his heart gives up and gives an attack or any other vital functional organ like liver or kidney or lungs give up leading to an immense suffering and finally death.
Who wants all this? Why when we walked the path of dharma and do good deeds have to go through this? Great souls like Gautama Buddha, Bhagwan Mahavira have reached nirvana stage and over come that suffering and great souls like Jesus Christ, Swami Vivekananda, Adi Shankaracharya etc all have attained moksha around 33 before could actually set in. That is what everyone looks for and that is what surrendering to Lord and praying for him would give. 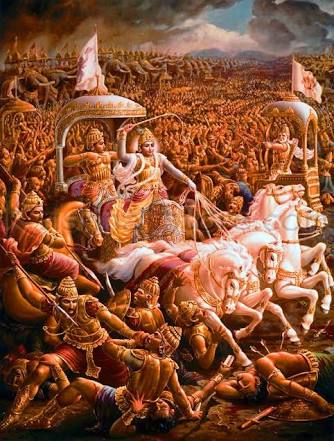