He who sees inaction in action and action in inaction, he is wise among men;
he is a Yogi and performer of all actions.

In this shloka Lord Krishna turns his attention to another aspect of looking at action and inaction. We have seen inaction as not doing anything, it also means not doing the action that is supposed to be done. This shloka brings out the third dimension of inaction that is doing an action without the feeling that am the doer of the action. Such an action is called inaction. A person who thinks like that is the wisest of all men. Lord Krishna equates such a person to a yogi who is the performer of all the perfect actions.

We always hear people say, “I did this”, “this is my work”, “I have put in all the efforts and hard work and achieved it”. Are these statements right? Think for a minute when you say, “I did this”. Who are “you”? You are a body that doesn’t know what it was in the past births and what it will be in the next moment. All that you have are the memories of past and efforts of present. With this limited knowledge, are you capable of doing anything? If you seriously contemplate on it, you will understand that all those statements connecting to you doing the actions is nothing but a myth.

Inaction in action is when you do actions but you don’t attribute them to yourself. You start firmly believing that you are just the instrument which does that action. The planner and executor is someone else. Let’s take for example, a pen which writes the exam and scores the highest marks. If the pen starts believing that it only wrote everything and all the marks it got are due to its own efforts, you will laugh at the pen. If the same analogy is taken, we are like a pen and We are held by God and we are made to do actions, and like everyone looks at the pen and not the hand, we also look at our actions but not the planner and executor of those actions ie God.

A wise understands this difference. He knows that all he is doing is what God is making him to do. so, for him its inaction. Inaction is where he doesn’t attribute any action to himself. Such kind of a person will not feel the pressure and can do any action because he knows that, like we hold the pen tightly while writing, God also will be holding us tightly while we are performing the actions. He will confidently and successfully do those actions and doesn’t claim the credit for any of the results attained from such actions.

Like the way, we turn the pen in different ways and put it to test while writing, God also puts us to many tests while we are performing actions to get the best results. 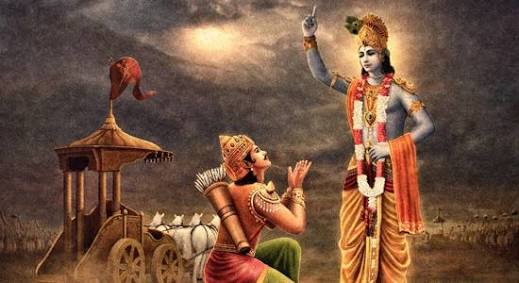