Vasistha tries his best to pull Arjun of the maya of Shukracharya. But he failed in it. Arjun doesn’t give any importance to the words of Vasistha and restarts his search for the Brahmin Boy. At the same time, Renuka and Jamadagni, parents of Parashuram make their way back to the ashram on the banks of river Narmada.

Tired of searching for Parshuram, Arjun decides to teach a lesson to his parents. Although he had respect for Jamadagni and Renuka for a long time, things have changed now. Arjun is more a person who is not in his senses. When he gets the news of their arrival in Ashram near river Narmada, he starts to feel as if a huge conspiracy is been scripted to defeat him and his kingdom. Thus, to put an end to all this speculation, he moves to the ashram, beats Jamadagni until wounds turn bloody and injure Renuka. His tone was rude and divisive. While going back to his Kingdom, he warns them not to conspire anything against him in future

Meanwhile, Parashuram finishes Meditation and he is given Pashupath Astra by Lord Shiva. A happy and overjoyed Parashuram wants to show it to his parents. With full excitement, he goes to Kanyakubj, but till then his parents have already left for Ashram near Narmada River. Parshuram is now on his way ashram and while he is travelling, he is happy with everything and recalls the memories with his parents.

But to his shock, the ashram is sabotaged and both the parents are badly injured. Parashuram is very angry and is desperate to seek revenge. But his father Jamadagni stops him and explains to him the power of the King and the duties of Brahmin. But Parashuram is just unstoppable. Till then all his Brahmin qualities are written off and he is now a Warrior, a Kshatriya.

Parashuram says ‘Dear father, the Astra I have with me is the message by god. He wants me to use it for re-establishing the lost dharma’. He quickly turns back and moves to Mahishmati. On the same day, a big Darbar of Kings was happening in Mahishmati. All the Samanta Rajas including Daval, Rohitashwa and Dushyant were all present. This meeting was called by Arjun to take stock of things across the Sapt Sindhu.

Parashuram reaches Mahishmati and he is stopped by the guards. On stopping Parashuram says ‘I want to meet King Arjun’. Guards pushed him away saying ‘He is in a meeting you cannot meet him for next two days. By the way, why the emperor of the world should meet a tiny fellow like you?’

In an irked tone, Parashuram says ‘I have come here to seek justice, your emperor has attacked my parents and I want his apology’. Guards laugh out and say ‘You tiny little boy! If you want money, King will give you that too if you fall on his feet. But your expectations are too much. Just go away from here or we have to use other means.’

Parshuram is in no mood to listen to anyone. He forcefully tries to enter and then four guards stop him. Within seconds all of them are dead. Like that in a fraction of minutes, 100 soldiers try to stop Parashuram and all of them get killed. All this reaches the army general and he is worried. Because his role is to make sure there is no security threat. He then goes with a platoon of the army to attack Parashuram. From minutes it goes to an hour. But the result is the same. All the soldiers including Army General are killed by Parashuram. 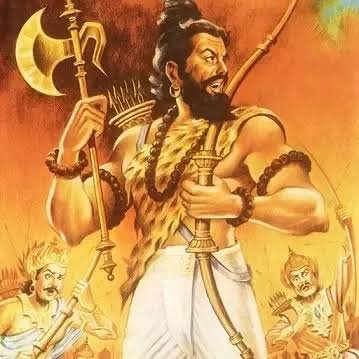 Now the message reaches King Arjun. He is in a serious meeting with other Kings and an unexpected message reaches him. Arjun is happy and angry. Happy because the prey is at his place, angry because Parashuram killed hundreds of his soldiers. This time, King Arjun sends ‘6 platoons’ of the army. Along with them, 6 army generals are sent to battle Parashuram. The war is full-on and the powerful Parashuram is killing soldiers like never before.

Somewhere in the jungles adjacent to the Narmada River, the three sons of King Arjun have gone hunting. Shukracharya is right there and he is using his black magic to watch all that is happening in Mahishmati. Back to Mahishmati: Parashuram jumps into the air and uses his Bow to shoot hundreds of arrows to kill the 6 platoons of the army.

Arjun is informed about the unfortunate news of armies getting killed and Parashuram approaching the darbar. Arjun gets up and says ‘Now is the time to put an end to this once for all. Brahmin boy, you are now going to see an end to your life.’ Manorama, his wife gets the news of Arjun preparing himself to battle Parashuram. Manorama urges and pleads Arjun not to fight Parashuram. Arjun says ‘I am not committing any sin. I am only doing my bit to save dharma and following Dattatreya’s guidelines. Guru told me nobody can defeat me until I follow the dharma’.

Arjun arrives at the battlefield. He says ‘You tiny little fellow, brahmin boy. You have killed my soldiers without any reason and I will take revenge of every single death.’ A fierce battle takes place between both the warriors. Parashuram then throws a weapon that hits on the chest of Arjun. The injury is so bad that it pushes Arjun to the ground. 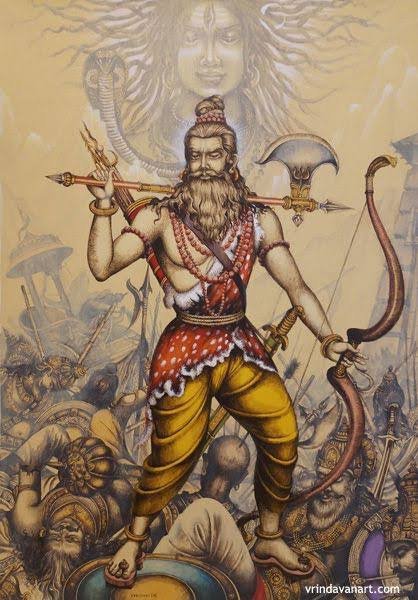 Arjun says ‘It’s only because of the presence of three of your friends you can defeat me. Dushyant, Deval and Rohitashwa have all betrayed me. I am not going to spare anyone. But first, let me get rid of you…’ Parshuram says ‘Enough is enough you fool. I have respected you but you haven’t fulfilled your responsibility as a King.’

Arjun then realises the mistakes he has committed. He remembers all the sins and negative thoughts which drove him to this path. But it is too late… also the story doesn’t end here… the violence doesn’t stop here… more violence and unfortunate events coming in the next post!